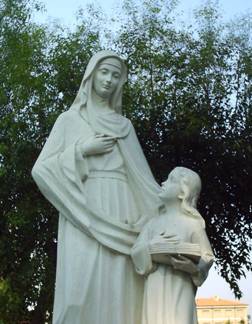 Our Congregation is placed under the protection of St. Ann, the model of mothers and educators.

Saint Ann is the mother of the Virgin Mary and we do not have precise historic information about her.

Her name is derived from the Hebrew word Hannah which means grace. She is not mentioned in the Canonical Gospels; instead the Apocryphal gospels speak about her and in particular the “Protovangelo of Saint James”.

“A tree is known by its fruit” (Mt 12:33). We know the fruit of this ancient plant: the Virgin Mary who, having been preserved from sin since her conception, gave birth to Jesus, thus becoming the “living tabernacle” of the Son of God. From the preciousness and holiness of the fruit, we come to know the greatness of the plant: the saintly parents Joachim and Ann.

Devotion to them first spread in the East. The first manifestation of veneration to St. Ann dates back to the time of Justinian who built a church in her honour at Constantinople around the year 550. In the X century devotion to her spread in the West as well, especially in Northern Europe.

In 1584 Pope Gregory XIII decided to insert the celebration of the feast of St. Ann in the Roman Missal, extending it to the entire Church. The liturgical commemoration of St. Joachim was left aside in the beginning and was later inserted in the calendar on a date different from that of his consort. With the liturgical reform that followed Vatican II, the saintly parents of the Virgin Mary were “reunited” in a single celebration, on 26 July.

St. Ann is considered the Patroness of various arts and trades, for having taught Mary the domestic chores and for having given to the world the “masterpiece” of humanity. Besides, St. Ann is the patroness of grandmothers, mothers, pregnant women and women in labour.

We consider her a woman of faith, a guardian of hope and a mother full of love. We look up to her, who gifted Mary to humanity, as our model, and to her we entrust our mission of accompanying the new generations in their growth towards complete happiness, so that humanity may once again be “immaculate” and the image of God who created us, shine forth in all.