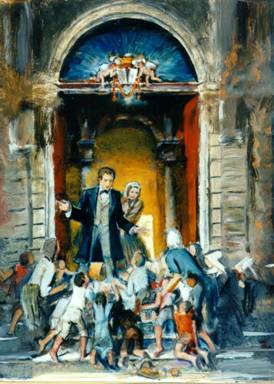 Carlo Tancredi and Giulia lived in deep union between themselves and in an unconditional self-giving to the neighbour.

Attentive to the signs of God and open to the needs of the times, they welcomed in their house, the children who were left alone or abandoned to the streets, since their parents were unable to take care of them.

Aware of the importance of education of the little ones, in 1834 they founded our Congregation as an instrument of Providence for the little and poor ones, incarnating in history the same attitudes of Jesus who welcomed the little children.

The Sisters were called to carry on their service in various centres and villages, first in Piedmont and then also in other parts of Italy, wherever their work was needed .

Just within 12 years from the foundation of the Congregation, the Sisters of St. Ann received Pontifical approval on 8th March 1846.