Enrichetta Dominici, in the world, Caterina, was born at Borgo Salsasio Carmagnola (TO), on 10 October 1829. She had a serene infancy, surrounded by the affection of her family members. However, around the year 1833 her father abandoned the family, which then moved to the house of her uncle who was Parish Priest. Such painful events marked her infancy and her adolescence. But Caterina rather than closing in on herself, opened herself to the positivity of life given to her and oriented her heart to God, whom she always called her Good Daddy, and to whom she turned with filial and trusting confidence. 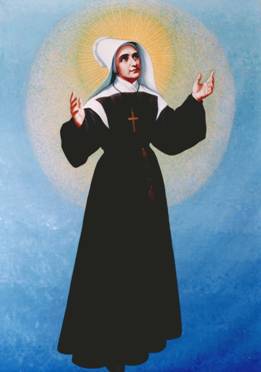 Caterina had a proud and independent temperament, but which was also tender and sensitive. Right from a young age she undertook an inner battle with her nature, letting God mould her character little by little. She gradually became a humble, simple, available and open creature, docile to the action of Grace. She learnt to say her “yes” to the Lord, day after day, and in the apparent ordinariness of daily life, began to live the virtues in a heroic way.
At the age of 21, she entered the Institute of the Sisters of St. Ann. She was received by the Foundress herself. On 26 July 1851 she was clothed with the religious habit, receiving the name of Sister Mary Enrichetta. In the Communities where the Lord placed her and in the various situations she met, Sister Enrichetta continued her life of self offering to the Father in a more and more intense manner. Fidelity in small actions was the secret of her journey: “Small actions accomplished with great love are worth more than heroic actions done with human interests”.
At the age of just 32 she was elected Superior General. Thus she received, at a very young age, the inheritance of a Congregation which was also at its beginnings and she found herself to be its “Mother” till the end of her life (1894). This election turned out to be a great gift of Providence.
Chosen by God to consolidate and develop the Institute, Mother Enrichetta was a faithful and reliable testimony of the Charism of the Founders. She opened the Institute to the horizons of the mission ad gentes, sending the first six missionaries to India in 1871.
Mother Enrichetta was a woman with her gaze turned to “God Alone”, she lived in His presence with the confidence and simplicity of a daughter. She sought the will of God in everything and abandoned herself to His will, becoming by her very life, a hymn of praise to the Most Holy Trinity.
This is the spiritual inheritance that she has left to us, her daughters, and to all those who have the grace to encounter her on their journey.
On 7 May 1978 Pope Paul VI proclaimed her Blessed, recognizing her spiritual wealth and fecundity and recommending her journey of sanctity as a model to be followed.